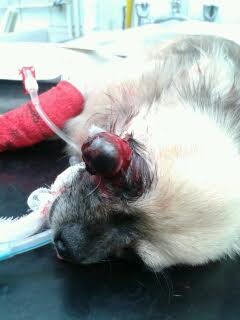 Imagine you are pregnant with your first child. A routine ultrasound scan reveals severe brachycephalic deformities (a shortening of the skull) in your unborn daughter. Her skull structure means that her airway will be narrowed and obstructed and her eyes and face will be incorrectly positioned. She will suffer from lifelong breathing difficulties, painful eye and skin conditions, and possible blindness. The common cold could kill her and she may need repeated surgeries on her eyes, face and throat. Any significant exertion will cause her to collapse from oxygen deprivation, and a minor incident could make her eyes prolapse out of their sockets. She will have to stay indoors on warm summer days, and if she wants to have children of her own she may not be able to give birth normally.

This situation would be a tragedy for most parents-to-be, one that they would do almost anything to avoid. Yet people will spend £2000 or more choosing this for their pet dog [4]. The brachycephalic breeds, such as Bulldogs and Pugs, are more desirable and fashionable than ever. Cats are not unaffected either- see your nearest Persian for details- although they arguably suffer less by virtue of their more sedentary lifestyle. So why this different outlook for animals? Although they may have differences in self-awareness of their own appearance, their sentience and capacity to suffer is not in doubt [2].

As a veterinary surgeon, I have an obligation to safeguard animal welfare. This was the oath I took on graduation. I must treat these dogs, and the pain and suffering inflicted on them by human choices, knowing that there are many thousands of healthy but unwanted dogs destroyed each year. It is difficult to support the claim that an anatomically deformed pet is a better companion than one with a healthy conformation. When I have questioned an owner’s decision to buy an unhealthy dog like this, the near-universal response is: “I know… but he’s like my baby… “.

If he or she was their actual baby, they would probably be crowdfunding private health care to pay for what was necessary to give them a shot at an enjoyable life. When it comes to their dog, they enjoy the validation of friends and family (“ooh she’s just so cute…”), and even sometimes that of veterinary professionals, but when it comes to the cost of treating the many problems these animals suffer from, they are strangers to reality. It’s well established that neotenization (preferential selection for juvenile characteristics) of pets has helped them to be successfully domesticated [1], but has it gone too far?

Brachycephalic dogs are not the only ones who suffer because of their deliberately selected anatomy. Dogs such as Dachshunds and Corgis, with cartilage deficits, do not grow legs in proportion to their body, causing spinal disease, pain and arthritis. Shar Peis lack an essential protein which gives their skin elasticity- the wrinkles that people find so endearing result in recurrent skin infections, plus painful eye and ear conditions.

There is an important conceptual difference between breeds like this and those who have ‘normal’ anatomy but inherited disease. The latter can be bred out. Anatomical disease is unavoidable if it is inherent in a preferred “breed standard”. The English Bulldog’s conformation is now so extreme that recent genetic analysis showed its gene pool to be beyond help [3]. But you will still see adverts for bulldog pups citing “healthy type”. The refusal of the Kennel Club to acknowledge this, despite their empty rhetoric about dog welfare, leaves vets with no choice but to do what they can- trying not to offend their clients while also pulling off the impossible feat of fulfilling the oath taken on entering the profession. How do you “do the best for the animals under your care” when a client wants you to help them breed bulldogs?

Many dog lovers have simply never considered the ethical issues involved in their choice of pet. They love their dog deeply and look after him or her responsibly. They simply aren’t aware, and haven’t thought about whether it is morally right to breed and buy dogs who are born with guaranteed negative welfare. Take away the cultural tunnel vision, and surely they could find a dog aesthetically desirable without resorting to cruelty by anatomy? There is no life without suffering, for anyone, but would they get less pleasure from a companion who was at least born with a fighting chance?

2. Broom DM (2014). The qualities that make up sentience. In: Sentience and Animal Welfare. Oxfordshire.

View all posts by Ethical Vet

This is a text widget, which allows you to add text or HTML to your sidebar. You can use them to display text, links, images, HTML, or a combination of these. Edit them in the Widget section of the Customizer.
Loading Comments...
Comment
×
%d bloggers like this: